It is important to find a place where you feel trust,
you feel belonging and stability.

One of the biggest challenges that I have faced as a headteacher was to put two schools, with two very differing stories, together. We had a nursery and infants school on the same site as a junior school. It made no sense for them to run independently and so the decision was made to close both and create a new school. It's not the closing or reopening that presents the challenge, it's the people inside them. Two very different schools, with very fortunes and very different perspectives. It's not about right and wrong, it's all about change. And people don't always like change.

Quite often in leadership, there will be the need for a little strategic smoke and Mirrors. Our new school was the amalgamation of two existing schools on the same site, and I had the privilege of becoming the first Headteacher. Following my appointment, the LA thoughtfully departed for their next project. At this point, I was still head of the junior school, whilst at the same time creating a new school. I had been appointed in May and so we had 3 months to put everything into place, ready to open. The school existed in name only.

I had a few trusty staff and governors by my side as we ventured into the unknown. I called favours in from friends and acquaintances. I asked a bloke to design the badge. I rang painter and decorators to paint the corridors. I went to the uniform shop in town, and after having a look at a few samples and with a bit of artistic license, I asked them to make our tie.

'It's one thing to create a school, but to create a school that can function successfully is a very big ask. To bring the staff together to subscribe to a brand new and unproven vision, and to serve a community where 80% of the 450 children are within the 'worst' 10% with regards to deprivation.

Arguably the most significant job was to convince our families that this was the right decision, the right choice for them, and that the new school had good reason to succeed.

Everyday, in preparation for opening, I created new and gentle ways of being able to secure some trust and excitement. These were surface level methods to promote our intentions, whilst getting to work on the internal provision. What we needed was to quickly generate a sense of pride and belonging, no doubt for the families, but more importantly for the children. This is not an easy thing to do.

For this part of the process, I decided to let this simmer for that big 2am epiphany. I'm sure that you are aware of this one, but I'll add further insight. If I were to sit down with my colleagues and to say 'We are going to meet now to come up with a great idea.' It would not work. This is not the way that great ideas are formed. There's a whole load of neuroscience behind this that I'm not well placed to regurgitate, but suffice to say, it's about the different parts of your brain and the jobs that they do. If I can carefully plant the idea, soak up the dilemma and the surrounding factors, then I can let it percolate. At 2am whilst sleeping like a baby, as my mind rests and my imagination plays, my eyes will suddenly open like dinner plates and my solution will present itself.

'The fixtures and fittings are important. The policies and principles are critical. But these will not serve to generate passion, commitment and a shared direction. Your vision is what you need to focus on - which is the most wonderful and purest aspect of leadership.'

I decided that we needed a school mascot. From my experience, kids love them. Not the creepy Ronald McDonald type, but the cuddly and cumbersome-cartoon type. Our old schools didn't have one and most schools don't.

With some excitement and secrecy, I set out to find our him/her. Once googled, I then followed the breadcrumbs to a site that made magical, mysterious and bespoke costumes.

We would call him Tommy, after St Thomas. Tommy would teach children how to cross the road and how to stay safe online. He would regularly visit our assemblies, hooking the children into our values. We hosted an annual anti-bullying campaign with Huddersfield Town. Andy Booth, ex-professional footballer and Town legend, would turn up with a tatty black holdall. Inside, we had 'Terry the Terrier' and 'Big G', the Giants rugby mascot. Along with Tommy, the three of them would perform a dramatic bullying scenario. They were asked by Andy to find a solution and to try and solve the problem. Then the children headed for their classrooms to complete themed discussions and work for the day. At the end of the day, the children reconvened with Tommy to establish the best solutions.

Our children would write to to him and he responded with special visits to reward great work and effort. We had themed units in our curriculum such as 'Tommy's Animal Kingdom'.

The more that you think about this, the more credible it becomes. To have a sense of belonging is a fundamental human need, and so it has to be a big part of bringing people together. If you are ever seeking to find different ways to communicate with children, you will struggle to find anything that has the same impact as big, furry blue mascot in the room. When we presented Tommy for the first time, we gave a presentation with photographs of Tommy visiting and applying for the job. Those are the beautiful moments when you are talking to the children in the hall, with your staff in on your plan, and everyone is laughing inside. It's magical when this can occur in the workplace.

Tommy was, and still is lots of fun. He would wave off our leavers and welcome our new starters. He was significant in shaping our identity and creating our heartbeat.

We were just too busy having fun to notice. 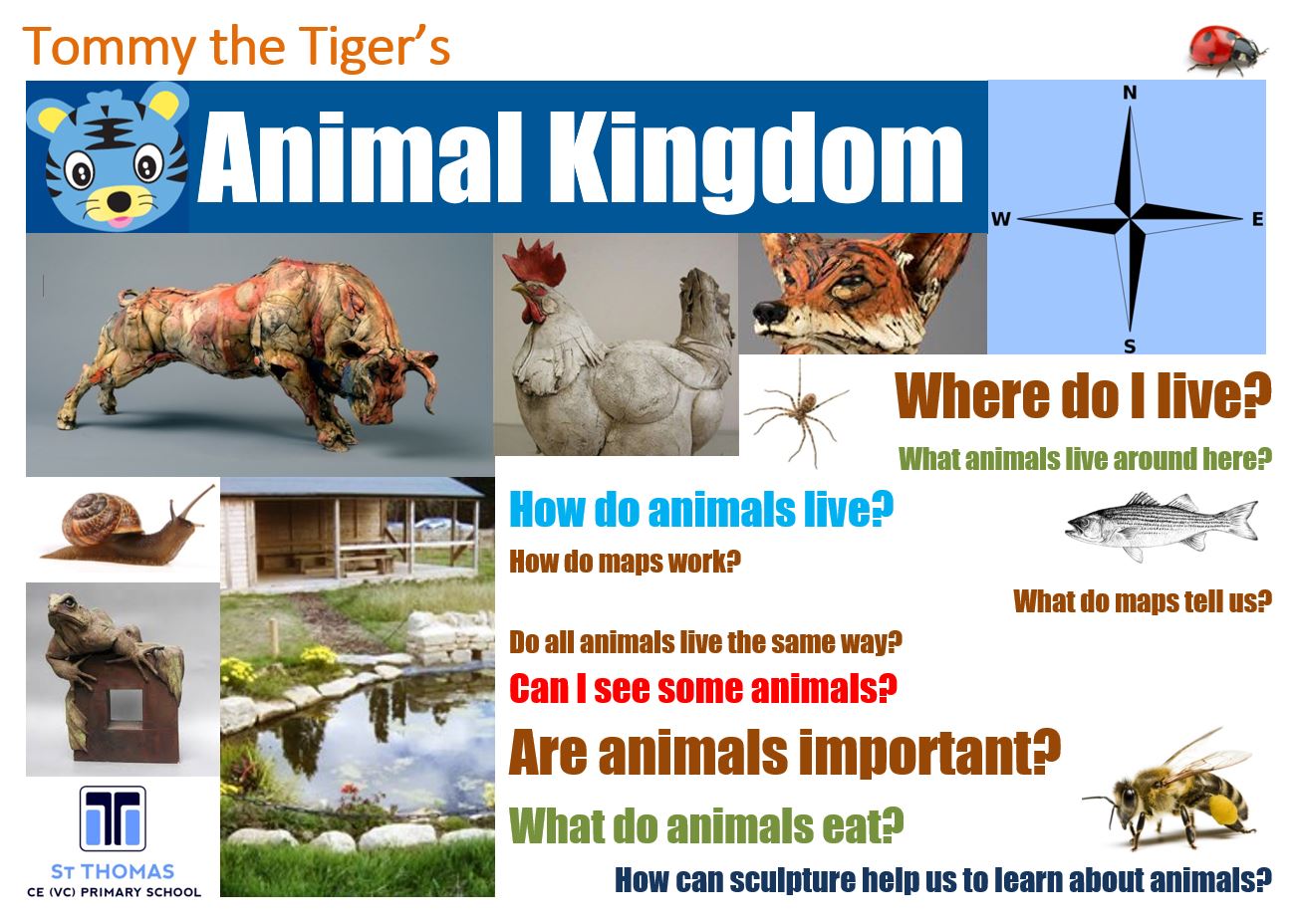 'Leadership is a great opportunity to be creative. It's riddled with invitations to do new, exciting things.'

This is serious business. The day that the school opens, the scrutiny begins. You have a DFE number and that means that you will inspected, judged and scrutinised. I also think that this is when you begin to learn the stark difference between leadership and management. The school would need to be organised. Timetables, planning proformas and rotas would all be required. I bought new kettles, microwaves and fridges to promote change. We argued over whether or not the end of play should conclude with a whistle (juniors) or a bell (infants). As you take care of these, it becomes clear that it's the things that you say that will make the difference between success and failure. It's the leadership and not the management.
We hear a lot about visions and rightly so. Visions aren't necessarily an easy concept, and they require just the right conditions to successfully create and nurture. In simplest terms, I learned how to justify everything and to think things through, to such an extent, that I could articulate a very clear 'why' for anything that we needed to do.

#Win
There were tensions between staff. They had been given little time to process the situation and both teams were loyal to their previous settings. They needed something new to offer hope and to indicate that we were going to do new, great things together. This is where transparency, trust, sincerity and consideration would all be required. If you can add humour to this, then you have the ability to lift spirits and to add likability and fun to the process. I was told by someone that the new school would be vulnerable, and that it would last 18 months. There's nothing fires me up more that being written off. By the time that we had celebrated our 10th birthday, we had secured two consecutive 'good' judgements, increased the number on roll by 25% and seen the back of the DFE broker who came after the first year to assess our viability for forced academisation.
‍
#Win
We called Tommy. He lived somewhere in Africa, but was always happy to find himself available for our diary. Whenever we had a new recruit in school, being Tommy was considered the most important part of their induction. Tommy arrived on this particular day and headed for the classrooms. It's a big school. Sixteen classes on a large site. Tommy visited everyone before popping in to say hello to the year one class that were doing PE in the hall. He was asked to do a rendition of 'Heads, Shoulders, knees and Toes'. Politely, Tommy obliged. As it finished, with the children having so much fun, the teacher insisted that he did it again. And again. And again. And again.

If you liked it, please share it. Thankyou, David.

Google+ has been discontinued. To ensure a better user experience, please consider removing this element from your site.

Observations, learning walks, book studies and parent and pupil surveys for your ipad or tablet

I have seen the best of you, and the worst of you,
and I choose both.

Get 'Everything is Going to be Alright' in your inbox

Oops! Something went wrong while submitting the form :(

How do you create calm with an unhappy mother?