Child-led learning is a term used to describe
education programmes in which children are
responsible for deciding what to learn.

This was an interesting little story to write because it's all about bikes, but it's really not all about bikes at all. A few years ago we began to review how the children played during the unstructured times of the day. We found some great reading that helped us to start in the right place, and then we did some inset together on this. We had all too often defined what the children would like, or what they would perceive to be 'fun'.

It was teatime on one of those lovely calm and warm evenings as I sat looking out of my office window, into the street below. The road was riddled with our children, from the youngest to the eldest, riding bikes. On our estate, it's what they do. You will not see a better wheelie than the ones cruising up Sherwood Ave.

'It would be fair to say that there were few helmets on show. Quite a number of the children didn't have brakes on their bikes or were riding bikes that were way too big or small. Regardless, they weaved and flipped across the street, impressing their friends with their collection of stunts and tricks.'

The next day we made a new plan. A BMX track. I was very aware that we would need to be accountable for our idea, particularly when reporting on spending. To me, the idea just made too much sense to be hindered by protocols. We discussed the project at length, incorporating all of the right people, including the governors too.

To start with, we wrote a credible cycling curriculum, working with British Cycling. We had regular, free visits from them to coach our sessions and this way we could work in partnership and observe. They have a fantastic website with some great session plans on there, and as you may expect, they were very excited by our ideas.

We trained our staff in year one on the Balanceability scheme, so that the children would be good cyclists from a young age. Then we commissioned a track from a trusted landscaper, based on another track in Sheffield. We then received some very generous sponsorship and our parent group fund raised for 30 BMX bikes and helmets because it was important that every child could ride in every lesson. A local engineering company then offered to help when they heard out us. They have a day where their staff have an opportunity to become involved in community projects. They sent ten staff to join us, armed with shovels and trucks full of old tyres, ready to build a bumper around the edge of the track.

'This project was around the time that the government decided that capital projects would not be a suitable use of the sports premium. This is where we took a risk and made our approach hard to argue against. We'd already rolled out full staff PE CPD and had rugby, tennis and mountaineering schemes running throughout school. All of our existing sports provision cost very little because of the staff that we had and the way that we worked. There was no way that we could be accused of anything other than adding to an already outstanding sports offer.'

When I look back at what we had created, I realise that we had somehow manged to distance ourselves over time from something very important. We see some outstanding examples of child-centred learning, particularly in early-years, and yet we all too often disconnect from this as the children grow. The practicalities and demands of curriculum coverage can soon become the focus, particularly as we head towards SATS at the end of key stage two.

We had recognised that we had sometimes been guilty of making decisions on behalf of our children, rather than planning from our children. The direction of travel when seeking engagement, which is what we always wanted, had all too often become reversed. We had been guilty of planning our learning, starting with the curriculum objectives, before seeking to find ways of making them engaging.

On this occasion, we had once again been reminded that we should be focusing on identifying and valuing the children's interests, before using these as an opportunity to inspire great engagement. 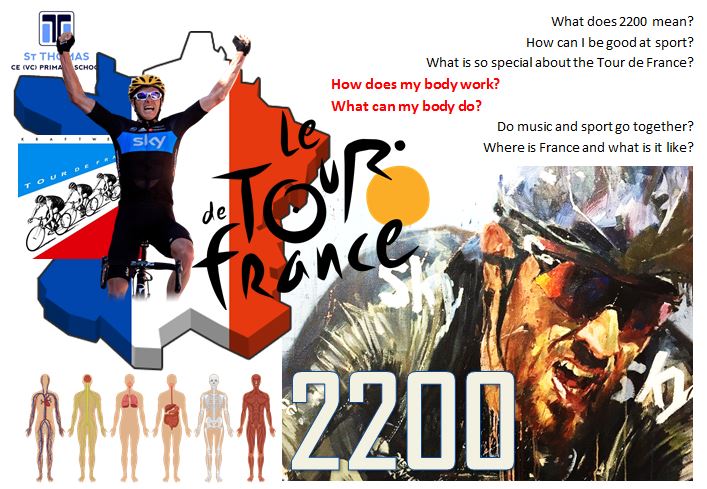 #Win
We wrote a lower key stage two unit of work that used cycling as the key driver. It was named 2200, referencing the distance of the Tour de France. This was a biology driven science unit that focused on the human body. Then we added the relevant diet and healthy eating objectives and we began to look at the demands on the riders both physically and psychologically. The children went to the National Cycling Centre in Manchester, rode bikes and watched the race back in school on the whiteboard. The Tour de Yorkshire passed the end of the street, which was no coincidence, and the children took photos and cheered with their families. We even had the Grand Depart, the first stage of the Tour de France, in town on one occasion.
‍
#Win
When BMX became an Olympic sport, it felt like the world was beginning to take something that children love, seriously. This gives credibility to the prospect of brining a new sport into school. There was quite a bit of resourcing required no doubt, but if you think that something could be great, then the logistics should be managed. Our children began cycling in year one, completing their Balanceability with our own trained staff and bikes. They then would do Bikeability, learning how to ride on the road, and as they left, we created the possibility of a pathway with a local city club. Our curriculum evolved really nicely. The children went on the track when they could ride well, which was a logical approach to risk assessment and management. Once they could comfortably ride, the children could use the track at lunchtimes and we would offer the older pupils time to perform quite a bit of bike maintenance.

The children, staff and families all recognised just how exciting and special this was for us. To celebrate and appreciate, we hosted a showpiece annual race day, with the rest of the school watching, starting with time trials and qualification.
‍
Whilst many of the children were naturally talented riders, there were others that weren't. For these pupils, they had been given the opportunity to learn to ride a bike. We would soon see our children peddling down the track and launching into the air, blissfully unaware that this was never the PE lesson that we had originally planned.

If you liked it, please share it. Thankyou, David.

Google+ has been discontinued. To ensure a better user experience, please consider removing this element from your site.

Observations, learning walks, book studies and parent and pupil surveys for your ipad or tablet

Get 'Everything is Going to be Alright' in your inbox

Oops! Something went wrong while submitting the form :(